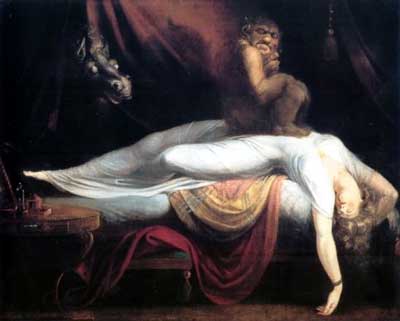 A couple of years ago, I had a really strange experience. I was lying in bed trying to get to sleep. I thought I was still awake and I opened my eyes and was sure that there was someone in the room with me. I closed my eyes tight, absolutely terrified and felt someone sit on the bed and then I felt as if someone was sitting on me as I couldn’t breathe and I was completely unable to move or struggle. After what seemed like a couple of minutes, I eventually woke up and found that it had all been a rather hideous nightmare, and it took me a long while to recover.

This same dream has happened to me maybe half a dozen times since. Always the same feeling that someone is in the room, a feeling of terror and the same suffocating sensation and the worst is not being able to struggle. It happened again last night with one refinement, this time, I knew what was happening was a nightmare and I although I still tried to fight the person off, it was more a case of trying to wake myself up as this time, I knew subconsciously, what was happening to me.

I was listening to the radio a while ago, and they were talking about why people think they have been abducted by aliens. One of the doctor/scientists on the programme said that one explanation was ‘Sleep Paralysis’ and went on to describe exactly what I have described to you above. I have since read a lot about about it and it is a very well documented phenomenon – try googling it, there are lots of references to it. Not everyone experiences the hallucinations which accompany the paralysis but it is felt that it may be a possible explanation for people thinking they have been visited by witches, ghosts and aliens and such like.

One of the many web sites that explains this experience is run by the University of Waterloo in Ontario, Canada and it has links to lots of other ones. The painting at the top of the page is by the Swiss artist, Henry Fuseli and is called ‘The NIghtmare’. It has been suggested that he may be depicting a sleep paralysis episode. In mythology, the Hag is a well known figure of a wizened old crone who is supposed to visit during sleep, sit on your chest and send you nightmares. So if I look a little ‘hagridden’ today, you will excuse me I’m sure! And it is Friday the 13th today…

Anyway, back to business. A couple of weeks ago, I got chatting to an old lady at the market stall when I was buying those plasticized fabrics. She asked me if I would have a go at restoring her favourite poetry book which she loved and used a lot, but which had fallen to bits after her dog had a go at chewing it (obviously not a poetry fan then). 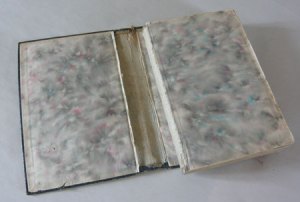 As you can see it was in a bit of a state, I was going to make a new case for it but she said she liked the original cover (teeth marks and all) so as I’m not really a book restorer I did the best I could with what I had, I hope she likes it. She won’t know of course that the first time I did it, I opened the book up and realized I had stuck the text block in UPSIDE DOWN. One of the advantages of making blank books is that this doesn’t normally matter. In this case, it mattered a lot, so I had to rip it apart and start again… 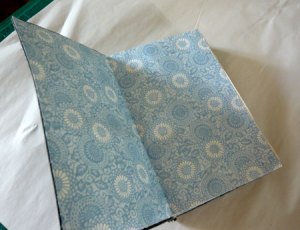 This has all been a bit serious hasn’t it? I’d better leave you with a bit of silliness to lighten the mood or you might not come back :-)

And to keep you up to date on the progress of my diet…. 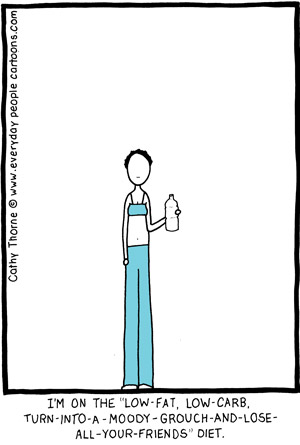