Jenny, who writes an hilarious blog over at I’m having a Thought Here-The Latest Whatever, tagged me a while ago to tell you 5 weird things about me. I have already done this meme a couple of times now (you can check out the two previous occasions here and here) so I hesitated to burden you with even more of my oddities. However, on reflection I came up with yet another five quite easily so here they are:

1 I am a bit of a pedant about grammar and spelling. I realise of course, that I am now laying myself open to being corrected every time I write my blog but so be it….

2 My 25th wedding anniversary was on September 11th 2001. A very bad day to be celebrating anything. My (ex) husband had bought me a ring to celebrate the occasion. It was two long thin baguette diamonds – which looked too much like the fateful twin towers for comfort. I have hardly ever worn it.

3 My first pregnancy lasted 11 months. I was originally told my son was going to be born on 25th January but when I had a scan at the beginning of December, they said he was too small and my pregnancy wasn’t as advanced as they had originally thought. They then said he was due on March 9th. He was actually born on March 19th. He still finds it very hard to get out of bed…. :-)

4 I was once on the television local news. I had been shopping in Waitrose and as I steered my wobbly trolley around a corner I was confronted by a cameraman and a woman holding a bowl of muesli. Apparently Dorset Cereals muesli (delicious-highly recommended) is selling like mad out in the Caribbean because they consider it to be an aphrodisiac. She wanted me to try a spoonful and comment. I appeared on the local news looking particularly startled and gormless, mumbling through a mouthful of muesli. Marvellous.

5 When I did my degree, I was the only girl in the class of 20 boys. At the time, Metallurgy was not a subject that appealed to girls. I only chose it because I did Maths, Physics and Chemistry ‘A’ levels and as I was spectacularly indecisive, I decided to study Metallurgy as I had been told it used all three subjects and I didn’t have to make a decision. Bad idea. And as I was spectacularly shy too, I barely spoke to anyone for most of the time I was there. What a waste!

(This image is of Metal Corrosion and was taken with the PAXcam digital microscope camera on an Olympus metallograph at Battelle Advanced Materials. So there.)

I’m not tagging anyone in particular but I would like lots of you to have a go at this (if only to let me know I’m not as weird as all that!) Just leave a link in the comments so I can see how weird you are what you have to say.

I am very thrilled that Number 2 so has just arrived home from university after completing his final year. (Where did that time go? It doesn’t seem like 5 minutes since I was dropping him off on his first day – three years ago!) He gets his results on Thursday so we are on tenterhooks until then…. It seems so odd to think that soon he will be off in the big wide world. I could get all wistful about how time flies and start reminiscing about when they were both babies but thereby lies depression and gloom, so I am just going to show what HE was like as a nipper and move swiftly on…. 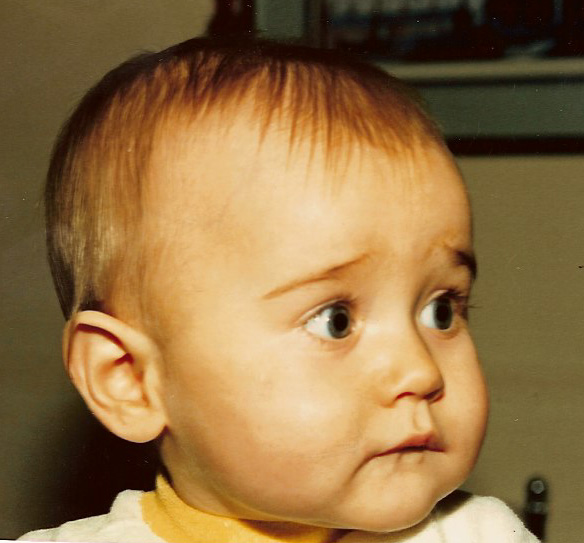 You may have noticed that I have gone quiet on the bookbinding front…. The large album had a major disaster a few days ago. I was sticking the cover paper onto the board cover and thought I was being very clever. (Ha! I should have known better!) Instead of putting the glue onto the paper and having to manhandle a large gluey piece of paper, I thought, ‘I know, I will put the glue on the board and then I can manhandle a DRY piece of paper into place’. Genius. Except that the paper wrinkled terribly when it came into contact with the gluey board (I’m thinking that maybe this was because the act of spreading the glue onto the paper, stretches the paper first but doing it this way, the paper stretches after it is on the board and so, wrinkles up).

I tried to smooth out the paper but I managed to tear it and as I didn’t have any more of this particular paper, it was a disaster of epic proportions! And it was a Brazilian marbled paper I ordered from Paper Mojo in the US. However, I have to say, Shelly at Paper Mojo was a star and has Fedexed me a couple of sheets which have just arrived. (I ordered a spare sheet too!) Luckily, as Number 2 son is now at home, I have the extra pair of hands I needed to finish covering the book, so hopefully, the next stage will go a bit more smoothly…. fingers crossed.

I am listening to Coldplay’s new album Viva La Vida and I like it very much. Have I ever mentioned what a HUGE Coldplay fan I am? I have seen them twice in concert in London and then I saw them at Glastonbury three years ago. They are fantastic live. This is the new Apple iTunes ad featuring them singing the title track from the album. I suppose it is just a coincidence that Chris Martin and Gwyneth Paltrow called their first baby Apple?

The only other thing I need to rave about is the match I watched yesterday between Rafa Nadal and Novak Djokovic in the final of the Stella Artois Championships at Queen’s Club in London. Sublime tennis – so exciting and as close a match as you could imagine. Nadal won eventually but Djokovic played wonderfully and it was a very close run thing.

What a shame my knee is still tweaking and I can’t play tennis otherwise I would have played like a demon today after watching such an inspirational match.