I was lucky enough to be invited to spend the weekend with friends who have a house in Devon near Salcombe. This part of Devon, for those of who don’t know it, is gorgeous. It’s called South Hams and the area is very green and pretty with its own microclimate which makes it a very popular holiday destination. It’s also a wonderful coastline for sailing as there are lots of picturesque towns and villages along the coast with marinas or mooring facilities. I have spent many a happy weekend pootling out to sea from Dartmouth, once sailing down to the beautiful Helford River in Cornwall, calling in at Salcombe, Fowey, Newton Ferrers, Bigbury on Sea and Burgh Island…all fabulous places.

Last weekend, the weather wasn’t brilliant – there were big black clouds but it didn’t rain despite the threatening sky and we had a wonderful time anyway. We even had a barbecue despite the cold wind. Well, the chaps barbecued and we ladies stayed inside…

On Saturday,we walked from Gara Rock round to Salcombe, a fairly vertiginous cliff path in parts but I kept my mind off the scary sheer drops by taking photographs of the stunning scenery. Click all images to enlarge. 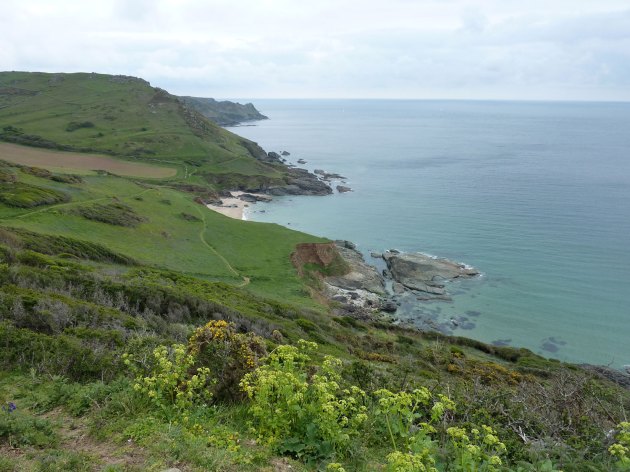 The start of the walk at Gara Rock

It was especially scenic as the cliffs were covered in bluebells and other wild flowers.

The wind can be very fierce as you can see from the shape of this wind swept tree.

Eventually as we walked along into Salcombe, we walked along the estuary and past sandy beaches. The sea was bright turquoise despite (or because of) the back clouds gathering overhead.

Unsurprisingly perhaps, on Monday morning when I opened the curtains to begin packing to go home, I was confronted by this…clear blue skies and sunshine.

The other excitement in my life has been the small matter of the General Election. Utterly absorbing and for once, completely riveting. I have never watched so much news or read so many newspapers as I have during the last few weeks. I resorted to checking the live election blogs of the Guardian and the Times online news web sites on my iPhone so I could follow the wheeling and dealing going on over the weekend while I was away. I went up to London by train on Tuesday and all the conversations were of the election. I have never known the country to be so gripped by politics.

And now we are left with the election for the new leader of the Labour party to entertain us. As I write the only candidates are the ‘Mili-band of brothers’ (not my joke I’m afraid, but I’m happy to steal it) which should interesting. Then I really must get back to work….