I’m feeling very sorry for myself today. About 10 days ago, I was playing tennis at a friend’s house and it was a beautiful sunny day. Idyllic you might think, except for lots of small flies which were flying around the court and even worse – biting us. I must have had a bad reaction to the bites because the next day, I had 6 bites which turned into blisters and then continued to grow. I looked like I had bubonic plague of the leg. I won’t go into too much detail about the ‘bursting blisters on cream trousers while on shopping expedition’ scenario, suffice to say, it was very embarrassing and itchy/painful as well. The blisters were just starting to heal when it was time to play tennis again.

This time, I wore cropped tracksuit trousers (not only to hide the ugly sores but to keep my legs covered in case the flies were around again) and I covered the small part of my legs which were still showing with insect repellant spray. The little buggers must have found the only square inch that I missed and have bitten me twice and I now have two nice fresh humungeous blisters again. They hurt and itch like crazy and as they are so close together, the effect seems twice as bad as before. I now have antibiotics to try and get rid of them once and for all – and when I play tennis next Monday, I am going to wear a full beekeepers suit. I’ll keep this image small so as not to frighten you too much…it’s quite disgusting. 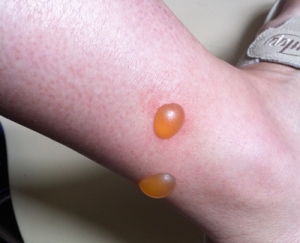 Anyway, before I was eaten alive, I’d been having quite a jolly time. I’m trying to remember what I have been doing since my last post and my photoblog is as good a reminder as anything, so apologies if you’ve seen some of this before!

I visited the Hampton Court Flower Show with some friends and we all loved this garden seat which was somehow woven out of growing bamboo.

I went to a ‘Back to the ’80s’ open air concert with my sister and niece in Shrewsbury which was great fun. We saw Go West, ABC, Rick Astley, Tony Hadley and Howard Jones – it was a really fun evening and great to hear all the old songs again. The highlight for me was seeing Peter Cox, the lead singer with Go West who just seems to improve with age. I swear he is much more gorgeous now than 30 years ago and his voice is amazing. I’ll even forgive him the ear ring…

I’ve been to an air show – the Royal International Air Tattoo and saw some rather amazing planes in action. Particulary awestruck by the F22 – Raptor, a mere £4 million.

I went to see ‘Inception’ which I really enjoyed and now need to see again to work out just what was going on – such a good film. And it had Cillian Murphy and Ken Watanabe in it….

I went AWOL for a day and had a girlie shopping expedition/lunch/afternoon tea in Exeter.

I went sailing with a group of friends in Weymouth Bay. The weather was pretty rubbish but it was quite breezy so we had a good sail and a lovely picnic while moored in Portland Harbour.

In between all this I have been working very hard on some web sites I have been asked to create so it’s not all fun and games. Honest.

To finish, I must share with you the work of a wonderful sculptor I discovered yesterday. She’s called Annawili Highfield and this is from her website. Do check out her work, the paper sculptures are especially astonishing.

I was tagged by Mimi over at Mimi writes… to take part in this meme, she tagged a whole lot of people and I noticed I was included over at Kim’s. Mimi was originally tagged by Travis, who created this – just as well, as a Mimi meme is too much of a mouthful :-)

Here are the instructions for Trav’s Staying Out Of The Dungeon Trivia Meme:
He said: A meme needs ‘structions.OK…here’s your ‘structions:
Your challenge, should you choose to accept it, is to:
1. Choose a category from one of these: Television, Stage & Screen, Nightly News, Publishing, Lives & Times, Music
2. Find 8 bits of trivia about your selected category
3. Be sure to let me know when…ok, if…you decide to play along so I can see what you come up with.
4. You may tag, or simply offer the meme for borrowing or stealing as you like.

So here we go. My chosen topic is Stage and Screen.

1 Tom Selleck was the original choice to play Indiana Jones. He turned the part down as he was too busy with ‘Magnum PI’ and it went to the lovely Harrison Ford.

2 Daniel Craig is the first actor to play James Bond, who is younger than the series itself.

3 Johnny Depp only had 169 words to learn in ‘Edward Scissorhands’.

4 Daniel Day Lewis and Russell Crowe were considered for the part of Aragorn in the ‘Lord of the Rings’ trilogy. Even though he had never read any of the books, Viggo Mortensen took the part, after being persuaded by his son who loved them.

5 ‘The Last Samurai’ was not only Ken Watanabe’s first American Film, it was also the first time he had spoken English in a film. Tom Cruise took no ‘up front’ salary for making this film and trained for two years before film making began, learning sword fighting and taking Japanese language lessons.

6 Bette Davis was the original choice for the lead role in ‘Mary Poppins’. Danny Kaye and Fred Astaire were considered for the role of Bert, which was played by Dick van Dyke (and his atrocious Cockney accent….) 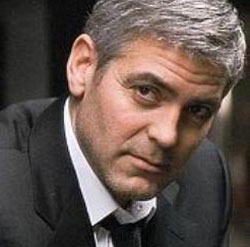 7 Only days before the role of Batman was cast in ‘Batman Begins’, eight actors were asked to audition for the part. The actors were Christian Bale, Joshua Jackson, Eion Bailey, Hugh Dancy, Billy Crudup, Cillian Murphy, Henry Cavill and Jake Gyllenhaal. While Bale won the part, Christopher Nolan liked Cillian Murphy’s audition so much, he cast him as Dr. Jonathan Crane/The Scarecrow.

8 Due to his part in ‘The Machinist’, Christian Bale was vastly underweight (about 120 pounds on his 6 foot+ frame) when he was under consideration for the part of Batman in ‘Batman Begins’. After being cast, he was told to become as “big as you could be” by Christopher Nolan, the director. Bale underwent a dietary and exercise regimen and ending up weighing about 220 pounds (about 40 pounds above his normal weight). It was decided that Bale had became too large (friends of his on the film’s crew dubbed him “Fatman”) and he quickly shed about 20 pounds to have leaner, more muscular frame.

So there you have it, 8 perfectly random facts (largely culled from the Internet Movie Database) and a wonderful excuse to have a look at some of my favourite movie actors. Yum!

I’m not going to tag anyone as it’s quite task compiling this list but if you’d like to have a go, please feel free!

While I’m at it catching up on tags and things, Dunn over at Simply Dunn, passed on this lovely award, which she received from Crissy, called the ‘Arte Y Pico’ award. Thank you so much, Dunn!

1. You have to pick 5 blogs that you consider deserve this award through creativity, design, interesting material, and also contributes to the blogger community, no matter of language.

2. Each award should have the name of the author with a link to their blog.

3. Award winners have to post the award with the name and link to the blog of the person who gave them the award.

4. Please include a link to the “Arte Y Pico” blog so that everyone will know where the award came from.

I’ve tried to find out what ‘Arte y Pico’ means but the nearest I can get from my translator widget is ‘art and tip’ (which makes no sense) I think it means like a tip of a mountain (the peak) so maybe it means ‘the peak of art’. I’d be glad for a good translation….

The weather here has been glorious, we had a wonderful weekend and I went to my first barbecue of the year on Sunday. It was a gorgeous afternoon and we played croquet which was great fun. Not quite like this game though.

I played tennis yesterday and today and have even been doing some gardening (not my forte, I must confess) but it is so wonderful to be outside in the warm sunshine. Needless to say, it is going to get cooler after today so I have been making the most of it – hence the lack of both bookbinding and blogging. I’m sure normal service will be resumed very soon.