Where the wild things are…

Well, hello there, I’m back! I have so much to tell you I don’t know where to begin. The new haircut? The holiday plans? My meeting up with an old friend? The lovely walks?  No, it has to be my excuse for my absence. After #2 son’s graduation, he came back home with me and we have been hanging out together before he heads off again. It’s been a nice reminder of how life used to be, having a boy with a bottomless pit for a stomach in the house again, it’s been one long round of cooking, food shopping and laundry, movies, music and cooking. And more laundry.

The graduation ceremony was a great thrill for me and the rest of the family. I thought I would explode with pride. My son looked so handsome in his gown (minus cap, you will notice. Apparently, the graduates had been throwing them into the air for photographs after the ceremony and it was thought that was too dangerous – someone had hurt their eye a year or so ago, so political correctness prevailed and they were banned apart from in the official studio portraits – utter madness.)

My two sons and my ex and I, had a great few days in Leeds, it really is a fun city with lots of great shopping  (unless you are shopping with/for two very fussy sons – and I thought women were supposed to be bad!) and restaurants. We had one particularly wonderful dinner at a restaurant called Anthony’s which was a bit ‘Heston Blumenthal’ if you know what I mean! Every dish had at least one ingredient that made you say ‘What?!’ (risotto of white onion, parmesan air and espresso? Or poached quail, pea sorbet, cocoa, morels? Or how about my dessert of apple parfait, pork filo and sage ice cream?) We were all totally amazed at how delicious it all was, in fact we would go so far as to say it was one of the best (if not the best) dinner we had ever eaten.

Since we returned, #2 son has spent his days fishing in the river which runs through our garden – amazingly he actually managed to catch a fish yesterday (which he threw back). I don’t know who was more surprised #2 son, me or the fish! He saw an otter in the river while he was fishing but by the time he had shouted me to come and look, it had gone – probably terrified by the loud shouting coming from the river bank :-)

We did manage to spot a fox in the field next to my garden. Apparently, it has four fox cubs which we haven’t managed to see yet but the mother fox comes out every evening for a walk around the field. We managed to catch some shots of her including this one of the fox eyeing up a crow which seemed quite oblivious. I love the view into the field, as do some others it seems… 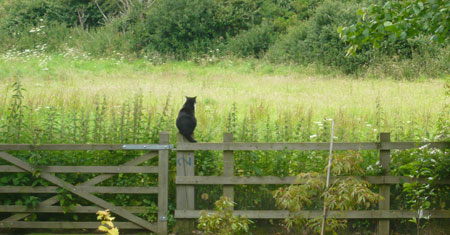 We have had a really fun time since we got back from Leeds. I’m very conscious that these times together are going to be much rarer in the future. My nest will be well and truly empty. On the bright side I will have lots of time to make books and play tennis… (knee is finally better, by the way). I have been working on a photo album which I am making as a gift for a friend whose daughter is about to give birth to a little girl – my friend’s first grandchild. Here is a sneak preview.

By the way, an update on my garden furniture saga. PayPal finally decided in my favour and have refunded me £500 which is the most they can, the balance is still to come from the dodgy seller, (Gemma at Land of Sofas) so I’m not holding my breath. I was contacted by someone else who read about my problems here, she had also bought furniture from this wretched woman but had been too late to file a claim with PayPal, so she stands to lose all her money.

When I was searching for alternative garden furniture, I found a web site selling the same furniture, under a different name (Home Living Online) but I could tell from the telephone number that it was the same people. Please do not buy from this company. I have reported them to the Trading Standards people and I hope that they will stop them from swindling any more unsuspecting customers.

Well, it’s nice to be back blogging and I have missed my visits to my blogging friends – thank you for your concern at my absence, but fret not!  #2 son is off on holiday next week so the house will be quiet again and I can get back into a routine. Books and blogging here I come….