I had a particularly good day yesterday. The night before, I stayed up until 2am printing pages and then got up at 7am to finish the job, rushed to the post office and posted the latest book to the record company, so that’s 8 finished, 12 to go. Once that job was done I could head off on a much anticipated trip.

Since I became interested in bookbinding, I have come across the work of Cathryn Miller on many occasions and I have always admired it. I was thrilled when she started commenting here. I bought a book recently called ‘500 Handmade Books’ a while ago and two books caught my eye in particular – both were by Cathryn. 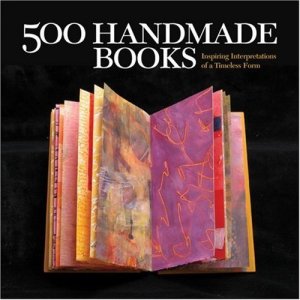 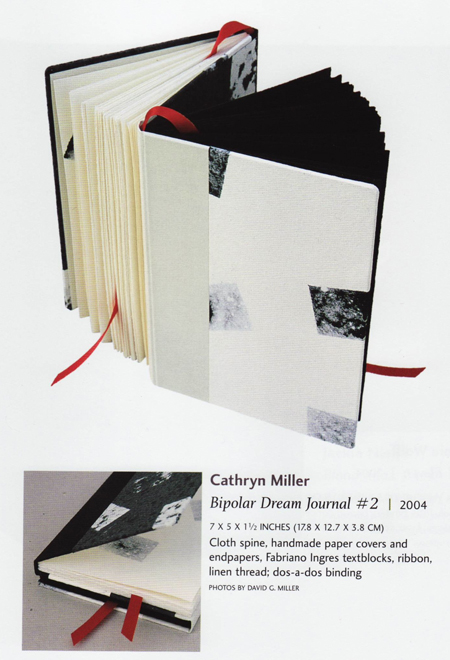 I particularly like this one because I had a go at this ‘dos-a-dos’ binding and it’s difficult! The colour scheme she uses is a favourite one of mine – I love the black and white and the red ribbons. My own effort used my images printed onto linen bookcloth. 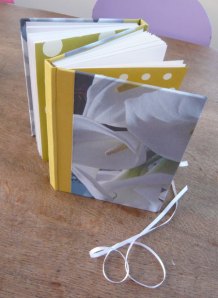 The second book I admired is one I have mentioned before in this post. It’s an ingenious construction made out of a single piece of card. The photographs on the book were all taken by Cathryn (the photographs of the books were taken by her husband, David) and when I think of what ingenuity and patience must have gone into working out the placement and construction of this it makes my brain hurt. It’s called a ‘bustrophedon variation’  and the piece is printed on both sides with Cathryn’s own images of street art. It’s called ‘No Skateboarding’.

I was thrilled when Cathryn started to comment here on my blog, and I was even more thrilled when she mentioned that she and her husband, David, were on a walking holiday in the UK and she suggested we meet. Well, yesterday, I went to Salisbury to meet her and David for lunch. Salisbury in Wiltshire, is famous for two things (there are probably a lot more but these are THE most famous things about Salisbury)  – Salisbury Cathedral

and it is now famous as the place I met Cathryn Miller  – and she gave me the artist’s proof of the ‘bustrophedon variation’ I mentioned above! It is exquisite! I have seldom been more surprised and thrilled, in fact I was almost (but not quite) rendered speechless at her generosity. If you read this when you get back from your trip, Cathryn, THANK YOU. You and David are delighful, talented people and it was a privilege and a pleasure to spend time with you both. I will let you know how I get on when I eventually have a go at a ‘bustrophedon variation’ – but it will have to wait until I have finished my book commission!

and playing with the dog at the beach

We had a nice walk today but a couple of days ago, we encountered a younger Bichon Frisé puppy. The two dogs squared up to each other, danced around for a few seconds, then the other puppy turned around, cocked his leg and peed all over Milo. We were both taken aback – I’ve never seen a dog do that before. The cheek of it! Poor Milo! Apparently, this happened because Milo was being submissive to the younger dog – so I am going to give him assertiveness training then we will go and find the puppy and show him who’s boss :-)

20 responses to “A fine day indeed”