Lots of stuff (or I’ve run out of titles…)

I was driving into Dorchester yesterday to the hairdressers (no major disasters there, hair same but shorter, hairdresser fully mobile again!) when I passed through an area called Poundbury. This is a ‘model village’ (read ‘housing estate’) which is being built on the outskirts of Dorchester by Prince Charles, the Prince of Wales.

It is a very contentious development as opinions are divided about the architectural merit (or otherwise) of the houses being built there, the density of the development and its eventual size. This quote is from a local web site and reflects some of the ‘anti’ feeling about Poundbury (the full letter can be read here, it’s hilarious!)

“In my understanding, be it correct or otherwise, the Poundbury development was intended to reflect the architecture and community of a traditional West Dorset country village. This, I assume, is the brief that the designers, architects and developers are working by. It is possible that I am not the only person who is struggling with that concept, considering that the Poundbury development is quite possibly the diametric opposite of that brief, in every perceivable way.

I am no designer, nor an architect or a developer, but it doesn’t take an expert in this field to reach the conclusion that the surreal, and quite frankly “fake” Poundbury development appears to be taking heavy inspiration from the following:

Personally, I think it’s dreadful and I could fill a whole post with my objections (hmm, now that’s an idea for a dull day) but one good thing that comes from all the digging and excavations that are going on are the poppies which spring up along the roadside. I was driving past and screeched to a halt to take some photographs of them. You can see some of Poundbury in the background.

I don’t mention Dorchester much but I went into town the other day and walked through the Borough Gardens and spotted the clock and the bandstand which have just been freshly painted and look really good.

All the bandstand needs is the Wessex Military Band which plays in Bucky Doo Square in Bridport on Saturday market days. They look amazing in their scarlet uniforms. I managed to get a shot of them last Saturday.

It makes a change to be showing you shots of the towns instead of the coast – I thought you might be getting a bit bored with those. I had a lovely surprise yesterday. My book swap book arrived. It was sent to me by Crazy Daisy Girl (alias Diana Waite) all the way from Utah. It’s a gorgeous little book and to tell me something about the town she lives in, she made the cover from a flour sack from a local flour mill, the pages are red to represent the red rocks which are from the area. Here are some photographs of it. 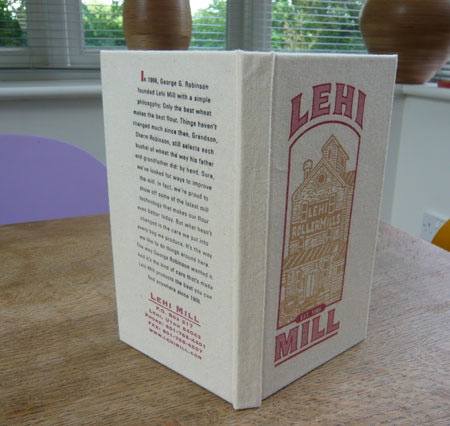 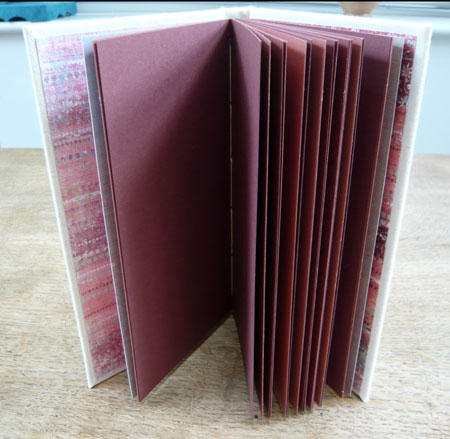 My album is coming along. I have finished sewing the pages together and have started to make the cover. It has been a nightmare! I am using thicker than usual board as the it needed to be sturdier due to the size of the album, so I had to take it to the gallery I used to work at where they have a huge guillotine which made short work of cutting the board to size. Of course I always have problems with glue and manoeuvering large sheets of gluey paper is just so difficult. I originally intended to have leather corners on the album but to be quite honest it would have made it even more difficult to position the marbled paper so I chickened out… Anyway, progress so far…

Instead, I am going to go and play with my Wii fit. I am trying to lose weight as you know and this is such a fun way of exercising. I love the step class and the hula hoop and the jogging and the downhill skiing slalom and the yoga….brilliant fun. For those of you who don’t know what I am talking about, check this out.

I have to close the blinds in case the neighbours think I have gone insane….next thing I’ll be moving to Poundbury :-)