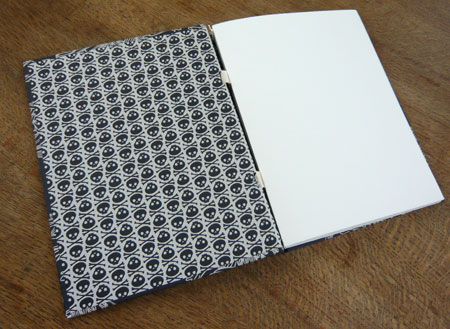 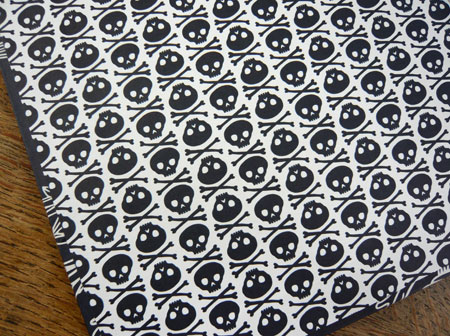 I love this paper! I bought it the other day in Exeter from Paperchase. On the outside this paper makes a very sophisticated book. The flowers are Agapanthus – I have some white ones in my garden and they are very tall, stately plants. The black and cream colour scheme adds to the elegance of the cover. Inside is a different story. I couldn’t resist putting these two together. The inside paper is a black and cream design of skulls and crossbones. Maybe it’s the sort of book a pirate would give his mother for Mothers’ Day :-)

Mothers’ Day today, I went searching for suitable quotes for the occasion and the one which really struck home was this one

“Making the decision to have a child – it’s momentous. It is to decide forever, to have your heart go walking around outside of your body” – Elizabeth Stone

I did a piece of calligraphy based around a quotation about children some years ago. I have no idea who wrote this but it struck a chord with me. I ended up doing 3 copies of this as a friend saw it and wanted a copy and then a friend of hers wanted a copy. It’s quite large (about 22″ x 30″) so it took me ages to do them all and I must confess I was heartily sick of it by the time I had done them all, but looking back at it, it still sums up all that’s wonderful about being a parent – not just a mum! If you click on the image you should get a larger version of it. If you still can’t read it I have written it out at the bottom of this post. 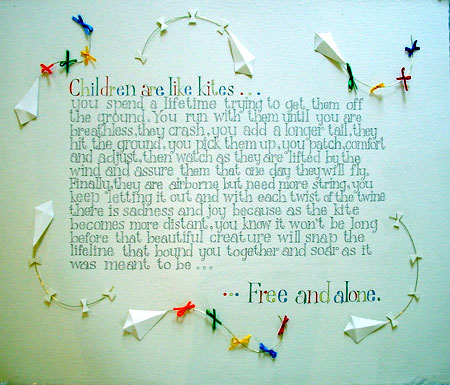 I think the reason that I liked the Mothers’ Day video yesterday so much was that it featured two brothers and I realised (or rather some of you picked up on the fact) that I have two boys and that was why it resonated with me so much. Well, just to reinforce this here’s another video by the same pair. They are very funny indeed

They have their own channel on You Tube, BaratsAndBereta and there is loads more of their stuff there.

“Children are like kites…you spend a lifetime trying to get them off the ground. You run with them until you are breathless, they crash, you add a longer tail, they hit the ground, you pick them up, you patch, comfort and adjust then watch as they are lifted by the wind and reassure them that one day they will fly. Finally, they are airborne but need more string, you keep letting it out and with each twist of the twine there is sadness and joy because as the kite becomes more distant, you know it won’t be long before that beautiful creature will snap the lifeline that bound you together and soar as it was meant to be…free and alone.”

26 responses to “Thoughts on parenthood”