15 Comments Posted by Diane on February 24, 2008
Now here is today’s ‘and finally’ item. I know it is first, but it’s my blog and I can do what I like here, so bear with me. This is one of those amazing optical illusions. If you stare at this and let your eyes go slightly out of focus, you can see a giraffe. Took me a while to see it but it is rather amazing.

Now back to business, this is today’s book. Red, black, white. Japanese Chiyogami paper from Paper Source. Not a lot more to say about it really. I like it, but then I’m a sucker for red and black. 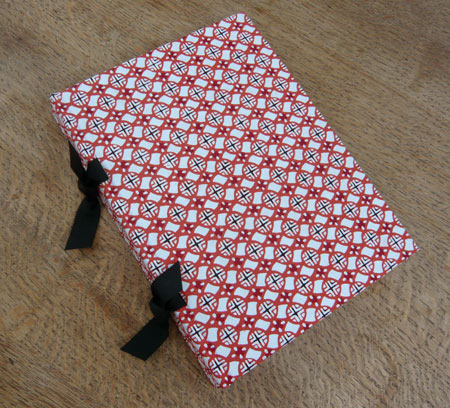 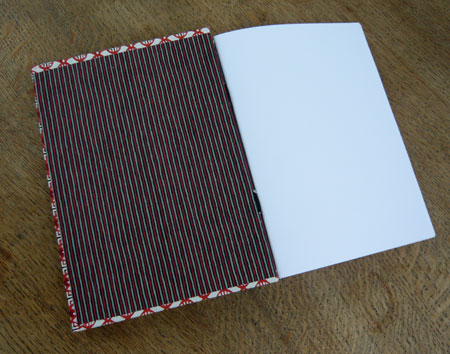 It’s been a busy weekend. I was up early on Saturday as a friend had asked if she could pop in as she wanted me to help her upload some images to Moo. She had seen my little Moo cards and wanted some but as she is not terribly good with computers (and she won’t mind me saying that!) I offered to help her.
We had no sooner started when another couple of friends dropped in unexpectedly. They had just returned from a holiday in Cuba and were full of news about what a fantastic time they had had. They had gone to Cuba to celebrate their 40th wedding anniversary (quite an achievement!) what they didn’t know was that their daughters had arranged a surprise party for them that very night. I was quite terrified I was going to inadvertently give the surprise away and was almost relieved when they eventually left, as the stress of not mentioning the party was giving me palpitations!
I did have one of those wonderful moments though, when you think of the perfect comment right on cue – and not two hours later as I usually do. Mike had said that he had been suffering with a bit of a dodgy stomach since he returned and it came to me – he must be suffering from ….wait for it….. Castroenteritis! Well, we thought it was funny….
They had no sooner gone home, than another couple of friends unexpectedly dropped in for coffee. I just thanked my lucky stars I wasn’t having one of my infrequent ‘pyjama days’ – that would have been just too embarrassing.
The surprise party was fantastic and miraculously, was just that – a complete surprise. The surprisees were suitably shocked and pleased and the surprisers were all suitably pleased with ourselves for not blabbing the secret. The party was themed around – guess what? Cuba, of course, and we drank lots of Cuban cocktails – Mojitos (a lethal mix of white rum, mint, sugar and lime juice) and we listened to the ‘Buena Vista Social Club’ to get us in the mood. An excellent night.
After my late night, I was woken this morning at 8.30am by my mother who said she hoped she hadn’t woken me up (she had) but she wanted to know if I had a copy of the ‘Mail on Sunday’ (an English newspaper). She was ringing to tell me that there was an article about my friend Claire Fordham (who is the friend I went to stay with in Los Angeles last year). I gave up having a lie-in at that point and went to the newsagent to buy a copy. The article was in the ‘You’ magazine section and as usual was very funny. It was all about her book and the film of the book, and the film of the film of the book…..
Here’s Claire appearing on the Craig Ferguson Show.
How cool is that?

15 responses to “A very sociable weekend”