Far from the madding crowd…

This book is made with a rather pretty paper with very dramatic colours – and lots of sparkle (not so keen on that!) It looks quite ‘retro’ and I’m sure the added ‘bling’ is going to appeal to someone…

I went for a walk with a group of friends yesterday. There were about 10 of us and we walked about 4-5 miles, I guess through Thorncombe Woods and on the way we passed Thomas Hardy’s cottage at Bockhampton. I have lived in Dorset for about 15 years and I am constantly surprised how many of our local landmarks I have yet to see – this being one of them! Unfortunately it was closed and I only managed to take this shot of it by climbing into a bush and leaning over a fence

This a photograph of it taken in the summer. 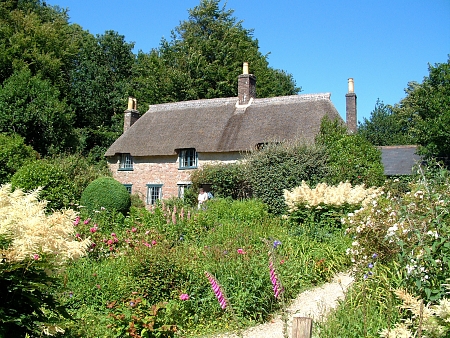 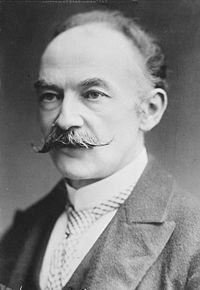 Thomas Hardy was born in Higher Bockhampton and became one of England’s most famous authors. His most celebrated books such as ‘Tess of the D’Urbervilles’, ‘Far From the Madding Crowd’ and the ‘Mayor of Casterbridge’ are all set in an imagined Wessex which is based around Dorset and all the towns he mentioned in his books are real places that he renamed. Dorchester became Casterbridge, Weymouth became Budmouth and Bridport became Port Bredy, for instance. The Thomas Hardy Society has a conference in Dorchester every year and fans of Thomas Hardy’s work all flock to the town to see where Thomas Hardy lived and worked and to visit the museum which has a recreation of his study and a large archive of his works and belongings. There are lectures, seminars, poetry readings and excursions including visits to Hardy’s Cottage and to Max Gate, the house he designed and built for himself, just outside Dorchester. They can also visit his grave at Stinsford where his heart is buried with his first wife, Emma – his ashes are in Westminster Abbey in London. You can read more about Thomas Hardy here.

‘Far from the Madding Crowd’ was made into a film in 1967 starring gorgeous Julie Christie, Terence Stamp, Alan Bates and Peter Finch. I always loved this film. I studied the novel for my GCE ‘O’ level and thought it was one time when a film had lived up to the original book. I had a serious crush on Terence Stamp at the time too although I did rather like Alan Bates as Gabriel Oak too. Dashing, handsome and mercurial versus strong, steady and reliable.

It was interesting watching the film again after I moved to Dorset and trying to spot where the film locations were – it was all filmed in Dorset. Here is the trailer for the film (please turn down the awful American voice over – they could at least have used an English accent – although perhaps not a broad Dorset one!)

If Thomas Hardy had used a computer to write his novels and poetry, I expect it would have looked like this one :-)

Vodpod videos no longer available. from video.stumbleupon.co posted with vodpod

15 responses to “Far from the madding crowd…”