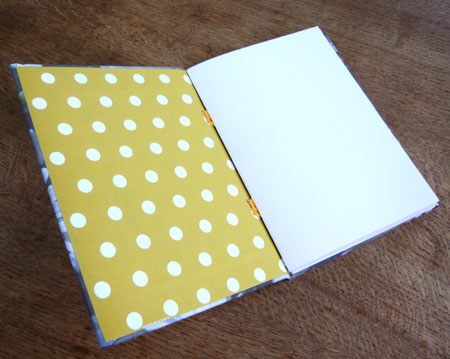 I am so excited by this book as it has set my imagination whirling…. Let me explain. This book is covered with a linen bookcloth which can be used in an inkjet printer. It comes in sheets which are roughly A4 size or roughly A3 size. The print on this book is a photograph I took in the summer of marguerites in my garden. It took me a while to get the printer set up to take these sheets. They are paper backed and as they are not quite a standard A3 size (they measure 11″ x 17″) they have to be treated as a custom size but once it’s set up, it’s easy. Half the problems came from the fact I was having to get used to my new Canon PIXMA Pro 9500 A3+ printer. This was my test print. I was quite prepared to bin this as I thought I would have to make some adjustments but it came out beautifully. It actually looks sort of faded – like an antique fabric which I really like. I am now trawling through my photographs for ones which will make good book covers and my mind is racing with thoughts of future photographic projects…..landscapes, flowers – people! The ultimate personalization!

Well, here it is finally. The new hairdo! I have had about 6″ cut off my hair and it is now a bob rather than droopy spaniel ears :) To distract you from me, I am sitting in front of my fish clock, a ceramic Gothic-surreal-call it what you will masterpiece which is so fragile, that after three or four house moves, half the pointy bits are held on with superglue but I still like it! And it tells the time perfectly. News Flash! I just went downstairs to see who made this clock and picked it up – and one of the spirals on the top fell off and broke in half. Marvellous. Anyway, it is made by J. Callaghan in 1997 and that’s as much as I can tell you about it.

To continue my makeover I bought new glasses (or spectacles as my optician calls them) It’s really difficult to buy glasses. I still have this hang up about ‘Men don’t make passes at girls who wear glasses’ and I grew up watching those films where the hero, after unsuccessfully wooing the beautiful unattainable one, finally notices his secretary, the plain bespectacled heroine (usually played by a gorgeous actress wearing glasses with a frump hairdo) You’ve all seen the scene where he removes her glasses, lets her hair down and says wonderingly ‘Why, Miss Smith! You are beautiful!’ This is a trend I’ve also seen in present day teen flicks and soaps. Take one gorgeous actress, tie her hair up and make her wear horrid glasses. Ugly duckling becomes swan by styling her hair and wearing contacts. ‘Now, Voyager’, ‘She’s All That’, Ugly Betty anyone?

So I eventually chose some groovy Prada specs which I hope send out the right message when I’m wearing them. I don’t have a photograph of me in specs so you will just have to imagine those. I do rather like them them though, they are dark green and very smart but I don’t want to have any ‘Miss Smith’ moments, I want to look fab all the time :-)