One of those nights last night. Woke at 3.35 am and couldn’t get back to sleep so I switched the light on and then read for an hour. Fell asleep for 30 minutes and woke again and read until 6.30, got up made tea, went back to bed then fell into a deep sleep and was nearly late for tennis this morning….and what a game it was . It was very windy so it was hard to play and the gusty wind made it very interesting, especially wearing so many layers of clothing, it was hard to move one’s arms properly, but play we did and had a great time.

When I got back, my flowers from the Go!Smell the Flowers competition had arrived and they are beautiful as you can see – and I have still got another 11 deliveries to send where I want over the next year! What a great prize. Thanks so much, Jim and Em! 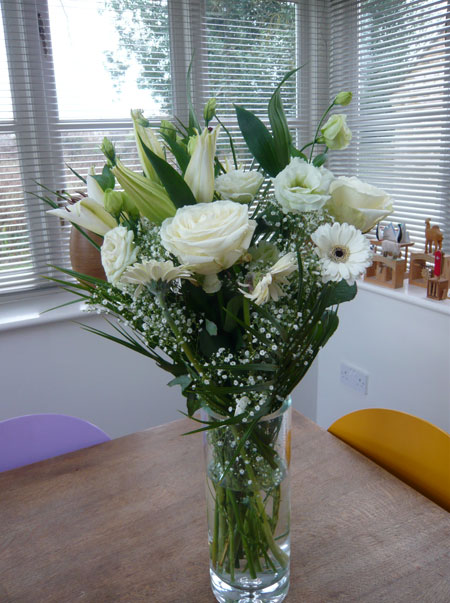 I was reading the latest post over at Kim @ Laketrees. To find that she has featured….guess who?…..ME! Hurrah for Kim! She has been nominated for several blogging awards (including Hottest Mommy Blogger) over at the Bloggers Choice Awards. She was nominated by Sue@BloggingSueblimely (what a great name) who has in turn been nominated for several awards. I headed over and voted for both of them as they both have fantastic blogs and deserve to win :-)

Kim also posted a great cartoon from Dave Walker @ Weblog cartoons (who also drew the ‘procrastination cartoon’ I posted a couple of days ago) about organising your desk. It’s very good and I thought I would follow Kim’s lead and post a photograph of my desk so you can see where I am writing this. 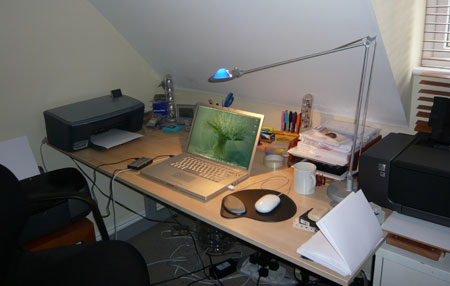 The key things to notice in this photograph are my MacBook Pro which is my baby and I love it. If you click on the photograph you can see a close up of my desktop photo which I think is beautiful. Three printers. Yes, three. One is a combination printer/scanner/copier so I keep it even though the printer no longer works well with my Mac, the other is an ordinary photo printer which has now been superceded by the third, which is a new A3+ size printer I have just bought so I can put into action a cunning idea I have had for my books. And then there is the spaghetti junction going on underneath. Bit like me really. On the surface all is tidy and organised, underneath turmoil :-) 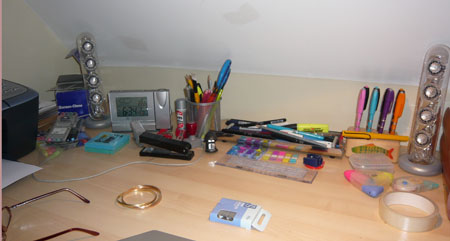 Hiding behind the Mac are three pots of pens and pencils, three staplers (why?) four packs of various highlighter and felt pens. Who says I am obsessed with stationery? There is a stamp which I used when I was doing my teacher training which says

I also have some speakers on my desk so I can listen to music and a clock and weather forecaster so I can see what the weather is doing in case I forget to look out of the window. It is radio controlled and is supposed to set the time itself. At the moment it is saying it is 6.34pm on the 8th January even though my Mac says it is 5.50pm and it is the 21st January. I think it might be broken…

So I dare you, post a photograph of your desk and computer desktop. Does it say much about you?