Sublime to the ridiculous? 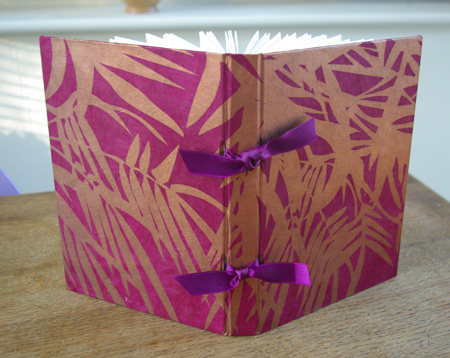 I’m showing you this book but even though it looks finished, it is still a work in progress. I searched high and low for some copper coloured ribbon as I thought that would look best but was unable to find any, so I went with a matching purple ribbon. It looks very ‘blah’ so as I have finally tracked down some copper coloured ribbon (which hopefully arrives in the morning), providing it does look better, I am going to change it over. I shall let you know what happens tomorrow…

I found a stamp which I was given as a gift many years ago and I thought that it would be nice to use it to sign all my books. It has my name written in Chinese and in English (it does occur to me I need to check it does really say my name and not some obscure Chinese swear word!) but it is very pretty and providing it does check out, I shall use it. I would be very grateful to hear from anyone who can shed some light on the Chinese calligraphy…

This award was started by Bob of Bobbarama fame. He says

”This award casts a spotlight on bloggers who are beginning to draw lotsa attention — the equivalent of a song with a bullet on Billboard’s Top 100 chart. Lotsa good posts. Lotsa good buzz. These bloggers are going places in a hurry.”

Colin over at ‘Life‘ blog very kindly awarded this to me and as he received seven awards yesterday, he is obviously very highly regarded and thus it is very kind of him to think of me.

I would like to pass this on to some blogs I have recently discovered which I like very much:

I also received this from lovely Kim over at Laketrees and PoeArtica. 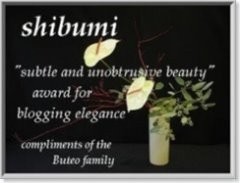 I’m particularly pleased to get this award “as the ‘Shibumi’ award was originally created by Hawk and has a deep and profound meaning:

‘Shibumi is a Japanese term which used in the following context is a noun. Its meaning refers to a ‘particular aesthetic of simple, subtle, and unobtrusive beauty’ which can be applied to almost anything.’ “

I’d like to award this to these blogs which I think are particularly elegant to look at:

Now, from the sublime to the ridiculous, as they say! I was also featured on a rather different blog. The Pisstakers, a satirical blog, (“Daily Satire at it’s Best”) features ‘MyBlogLog Sunday’. I was featured in MyBlogLog Sunday 30. Apparently, every Sunday at the same time, they visit and take a snap shot of the last 10 blogs to visit their blog. Their review of my blog follows:

“Diane is to arts and crafts what Hannibal Lector is to human liver recipes – there seems to be no limit to her creativity. Paper, book-binding and “Paper, scissors, stone” it’s all there.”

Well, that just about says it all really. Pass me the Chianti….

18 responses to “Sublime to the ridiculous?”