OK, I confess, my name is Diane Aldred and I am a paper addict…

I am back from two days in London with Ludwig. I had thought I was being very clever and had packed everything I needed for the trip into one rucksack, but putting the contents of my handbag, a change of clothes, toiletries (and make up) and my laptop – and of course my book for the train journey (A Thousand Splendid Suns by Khaled Hosseini – excellent but VERY heavy book) all into one bag meant it weighed a ton and I really struggled with it. L kept asking to carry it for me but I figured it was my bag so I ought to carry it. I think one shoulder is now lower than the other.

We traipsed all over London, visiting Falkiners, Cornelissens and finally Paperchase (which was a revelation – I didn’t realise the top floor sold such a range of fine art paper as opposed to the wrapping paper downstairs) so that I was good and weighed down with paper, books and stationery.

In the evening we went to see ‘Once’ a beautiful little Irish film which won the Audience Award at the Sundance Film Festival and was nominated for the Grand Jury Prize. I heard about it when I was in LA as it is hugely popular over there but has only just been released in the UK. It’s a modern day musical – I bought the soundtrack from iTunes – I love the song ‘Falling Slowly’ – it’s gorgeous and I highly recommend the film and the soundtrack, if you like romantic, singer-songwriter-ery musical type movies.

The next day we went to Hamilton’s gallery to see an exhibition of Helmut Newton prints. I was not impressed, they were badly printed, emotionally cold and altogether highly overrated. Not my ‘tasse de thé’ at all. We then went to the National Portrait Gallery to see the Pop Art portraits exhibition which was much better. The highlight for me were the ‘Marilyn’ prints and a gorgeously simple self portrait by Andy Warhol. Other artists I particularly like were also in this small but colourful exhibition- Robert Indiana, Roy Lichtenstein and David Hockney. I think it’s on until January 2008 so worth a visit if you get a chance. 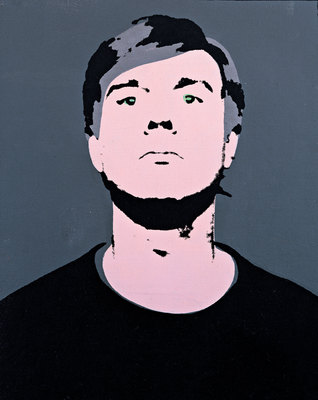 So now I am back, with all my senses refreshed, replenished, reinvigorated and revived, restocked with yummy paper and ready to roll. Back to the books