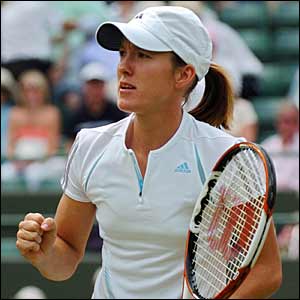 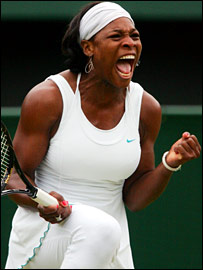 Just finished watching Justine Henin defeating Serena Williams 6-4, 3-6, 6-3 in a very entertaining match which was only surpassed by the post match entertainment – otherwise known as eavesdropping. The camera on BBC interactive was just showing a general view of Centre court and the commentators were silent, the only sound being the general background noise. Apart from a man’s voice, sounding very peeved, telling his friend that “it just made me look like a complete wally…” there was more mumbling then he said “have you come to apologise?” and a new voice introduced himself as the BBC sound engineer warning him that he was sitting under a microphone. I wish I had heard the rest of his rant as it was obviously juicy enough to warrant the BBC man warning the guy to shut up!

My son has been working at Wimbledon as a court attendant – he is one of the poor souls who has to drag the covers over the court every time it rains. He thought he would have a pleasant fortnight, possibly sitting in the sun, watching lots of tennis. He was thrilled to find out that his duties involved an hour of score board duty followed by (in an ideal world) 4 hours off unless he was needed for court covering duties. The reality has been 14 hour days, involving getting very wet and having to cover the courts seemingly every few minutes and lots of hanging around. He is exhausted! He was very relieved that they didn’t play on the middle Sunday as he had a chance to catch up on some sleep. He said that the court attendants and ball boys are also under fire for losing towels. They have to give each player two towels each but when they re-appear after a rain break, the players often ask for more towels and as my son says, it’s very hard to refuse! This article in the Times explains what is going on, even to multi-millionaire tennis players, the towels are covetable as souvenirs, apparently even Roger Federer pilfers them!

As a doting mother, I have found myself watching Wimbledon coverage on two TV sets, one with the interactive multiscreen on and one with the match I am following, just in case the court my son is working on is featured and I get to see him on TV. Success today! He texted me to say he was watching a bit of tennis on Court 13 and was sitting behind the players’ chairs, he rang me just as I was changing channels and I was able to see him, chatting on the phone to me!

PS I just checked the Wimbledon online shop – the 2007 towels are sold out!

Families, Shopping, Tennis
← All that glitters Joseph to the rescue! →